On Oct. 4, 2016, Troop 407 had a Court of Honor. David did the invocation. Everybody then ate enchiladas for dinner. The bulldogs did the flag ceremony.

We talked about our plans to sell greenery to raise money for summer camp and other things, and the troop’s greenery coordinator showed us a ribbon tree with one ribbon for each patrol and a clip for each Scout so we can keep track of who’s selling the most each week and moving up the ribbon fastest.

Jen also talked about the special honors our troop earned at summer camp, and she brought out Wilson, a sculpture made out of sticks, toilet paper and a paper plate, that was our trophy for winning the overall best campsite.

Our adult leaders also presented the troop with many different merit badges, earned at summer camp and other times.

It was Janel’s birthday, so we sang to her and had birthday cake for dessert.

Troop members camped in Holcomb Valley in September 2016. It was a mountain location with a lot of pine and cedar trees, and it was very cold, especially at night. It used to be a summer camp, and our leader, Jim, actually used to go to summer camp up there. There were still some old tents and cots there, and we had fun setting up a fort out of some of the old cots.

Another memorable experience was going on a hike that was five miles long. About seven kids and an adult got lost on the hike after taking the wrong path because it looked more clear than the other path, which had a lot of dense bushes and didn’t seem as passable. Fortunately, we had cell phone service, so we were able to find the others.

Also at Holcomb Valley, there were some horses in a big open field. Some boys decided to give them names. One of them was named Moonshine, because it was white and looked like the moon at night. There was a fence around the horses, but there were a lot of openings in the fence. Some boys and two adults started getting closer to the horses. One of these boys fell and then Moonshine charged him and kicked his backpack. While the boy was still down, Moonshine was getting ready to charge again. But another boy was able to distract the horse. If it wasn’t for this quick-thinking Scout, the other boy might have been trampled by the horse.

Another thing the Scouts did was an orienteering course. Scouts used a compass and the number of feet per pace to try to find out how to get to a certain destination. It took over an hour to do the course, but everyone eventually finished.

I think Holcomb Valley was a great trip and I hope we will come again.

In August 2016 everyone in Troop 407 packed up their bags to go to Camp Chawanakee, which is near Shaver Lake. We got there and chose tents. Our troop got a spot right by the lake. It was very rocky, but the views were breathtaking. In the morning, you could see carp jumping out of the water.

Summer camp is an opportunity to earn merit badges, awards, ranks, and many other badges. We had four stations to go every day, then there was free time, where you could do various activities, like swimming, mountain boarding, mountain biking, or do extra merit badges. Some people who didn’t have merit badge classes during their free time went to the lake to fish.

On some days you could go to Polar Bear, which was at 6:00 a.m. You would participate in various activities, which included getting into the lake, which was warmer than the air outside. Then the staff would wait until you got used to the water then make you lay on the deck which would make you VERY cold. You would also get back in and do polar bear exercises and catch a sand fish, which is a clump of sand. Participants earned a patch for their commitment.

Some troops could participate in a canoe trip, which you would do at night, and then sleep on an island. The sun set while we were canoeing. When we got to the island there were no tents to set up; we just slept on the ground in our sleeping bags. The island was forested, but some of the trees were dead. We woke up really early, went back to our regular camp and ate breakfast there. The experience was really fun and taught us to be prepared for anything.

Near the very end of camp, the staff had an awards ceremony. Some participants earned various awards, including Elliott winning a prize for catching the heaviest fish of the week and Aiden winning Pilgrim Scout for being a good representative of the Scout Law.  Several kids also earned the Hunter Award. The troop also earned awards including Wilson, which was awarded because we did a good job cleaning up our campsite, and the Horse stick, which was awarded to Jude, Zach and Zack for cleaning up every single bucket in the horse corral really quickly.

Summer camp was a great experience, and I’m sure all the Scouts can’t wait until next year.

On April 24, 2016, Ryan became an Eagle Scout in a ceremony at the Doubletree Hotel in Claremont. John Campbell was the emcee. Troop leader Jim Martin gave his famous speech about Eagle Scouts and called an “Eagle’s Nest,” which is when former Eagles come into a circle and recite a pledge. 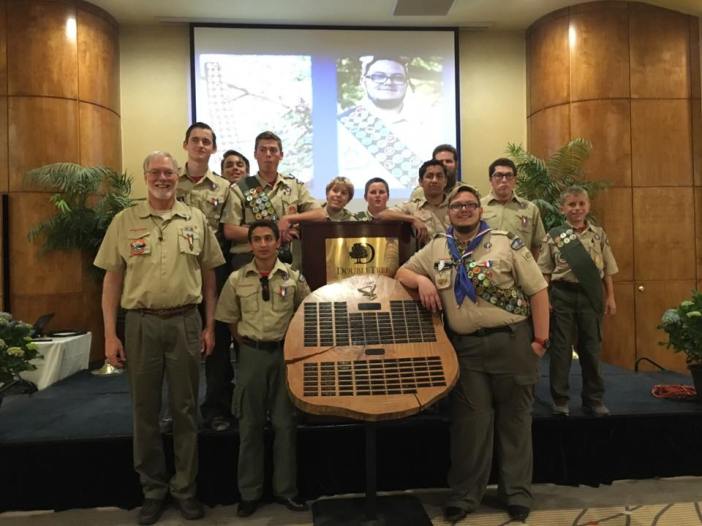